Healthy Shoulder Movement in Downward Facing Dog, Warrior One and Other Asanas

'Reach your arms overhead and bring you shoulder blades down your back.' How often do you hear this well intentioned cue or something similar uttered in a yoga class?

Probably fairly often, and as a teacher I know I have said it plenty of times. In theory it's a good cue aimed at preventing students hunching their shoulders up around their ears when they bring their arms overhead or move into downward facing dog. Instead of hunching, we would like our students to feel breadth across the back of their shoulders and free around their necks.

However, what we are actually asking our students to do is dislocate their shoulders! Unlike the hip, the shoulder is optimized for mobility rather than stability. That means instead of there being a nice deep socket for the head of the upper arm bone (humerus) to sit into there is only a small shallow area on the side of the shoulder blade (scapula). A bit like a golf ball in a tee, see below. 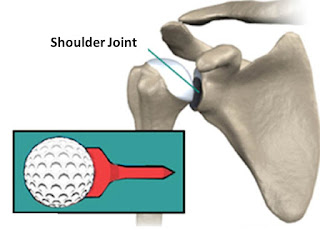 So if you start trying to bring the shoulder blades down while the arms are raised, the head of the upper arm bone starts to separate from its socket on the shoulder blade. Not the healthiest movement pattern to be promoting, especially for anyone with shoulder instability. As teachers we would still like to discourage hunched shoulders in down dog or warrior one, so what to cue instead?

Happily mother nature is already one step ahead. The shoulder blade naturally rotates outwards once the arms get past 90 degrees. This is to avoid the bony projections above the shoulder joint blocking the movement of the arm bone as it elevates further as shown in the photo sequence below.

We can still cue our shoulders, or our students shoulders, not to hunch but by encouraging the natural rotation of the shoulder blade instead. A helpful cue in downward dog might be: 'Wrap your shoulder blades around towards you underarms'. In warrior one 'Roll your little fingers in towards each other'. By shifting the focus from down to breadth we can work with the body not against and still achieve open shoulders and free necks. Try it and see what you think! 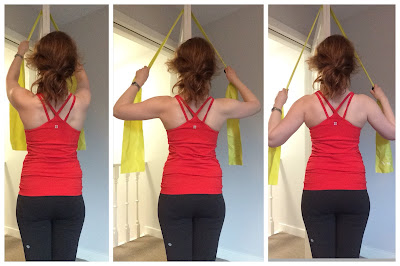